Hormones are chemical messengers that travel around the body in the bloodstream. They are produced in specific sites, but each hormone affects only cells that have the correct receptor molecules on their surface. These cells may be in another part of the body. This receptor mechanism - also known as 'lock and key' - allows hormones to circulate throughout the body without triggering reactions in every cell. Many other body chemicals use the same technique to target their message and some recent research has shown that hormones, nervous system transmitters and immune system chemicals are more similar and interdependent than was first thought.

Hormones help to maintain balance in the body - homeostasis - the other control mechanism being the nervous system. Hormonal changes tend to be slower and longer-lived than nervous changes. Metabolism, growth, sleep, reproduction, the balance of body fluids and our response to stress are all hormone-controlled.

These are the main endocrine, or hormone producing structures:

The pituitary gland sits at the base of the brain. It releases eight hormones, several of which affect other endocrine glands. For example, thyroid stimulating hormone, or TSH, controls the output of the thyroid gland. The pituitary is often called the 'master gland', but, in fact, it is regulated by chemical signals from another part of the brain - the hypothalamus, which also controls homeostasis via the nervous system.
The pineal gland is buried deeper within the brain and secretes melatonin in response to darkness - this hormone regulates our circadian or daily rhythm. 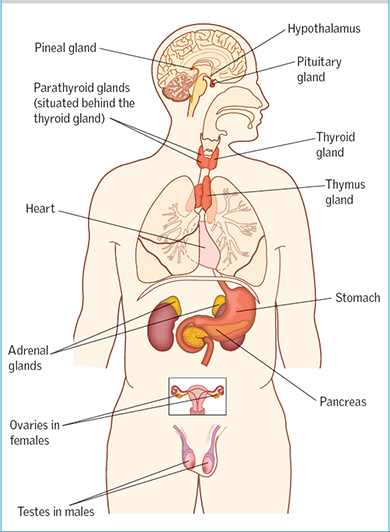 The thyroid gland sits in front of the larynx and produces thyroxine, which sets the rate at which our cells convert nutrients and oxygen into energy - our metabolic rate. Excess thyroxine production, called hyperthyroidism, leads to mental and physical irritability, high body temperature and weight loss despite increased appetite. The gland itself may become enlarged, known as a goitre. An underactive thyroid - hypothyroidism - has the opposite symptoms.

Specialised beta cells in parts of the pancreas, called the isles of langerhans, release insulin, which controls the supply of glucose to the cells. Lack of insulin leads to diabetes. Type 1, or insulin-dependent diabetes, commonly begins around adolescence, while type 2, non-insulin dependent diabetes, is associated with obesity and usually occurs in later life.

The adrenal glands sit on top of the kidneys and consist of an outer cortex and inner medulla. The medulla produces the nervous system transmitters, adrenaline an noradrenaline. The cortex is arranged in three layers, each producing a different group of steroids, cholesterol base hormones. Mineralcorticoids come from the first layer, and regulate blood and urine mineral levels. The middle layer makes glucocorticoids, particularly hyrocortisone, that influence blood sugar levels, inflammation, the immune system and stress responses. The innermost layer makes small amounts of sex hormones.

The male and female sex glands, or gonads, develop in the abdomen during embryonic growth. In women, the ovaries descend into the pelvis and are attached to the uterus. In men, the testes can't produce sperm at internal body temperatures, so they travel out of the abdomen into the scrotum, usually before birth.

The levels of hormones in our blood fluctuate during the day, in a prearranged way, so we can take advantage of daylight, for maximum activity, and wind down as darkness falls. Unexpected exertion or trauma causes more dramatic changes. The overall pattern is coordinated by the hypothalamus, using feedback mechanisms that detect hormone levels and trigger messages from the pituitary gland to stimulate or inhibit hormone production.

Because women take the major role in reproduction, the female system is more complex. The male function is to produce, store and then ejaculate sperm cells, whereas the female function is to produce and store egg cells, provide a safe environment for fertilisation and implantation of the egg, nurture and develop the foetus, give birth and feed the infant. No comparison really! It's hardly surprising that women are more aware of their hormonal changes.

The menstrual cycle involves two hormones from the pituitary gland and two from the ovaries. One pituitary hormone, follicle stimulating hormone, FSH, triggers the ripening of one of the immature eggs in the ovaries. As the egg rises to the surface the surrounding follicle, or fluid filled sac, produces increased levels of oestrogen, causing the lining of the uterus - the endometrium - to thicken. When the egg is ripe it bursts from the follicale under the stimulus of a second pituitary hormone, lutenizing hormone or LH. This is ovulation. The released egg is drawn into the opening of the nearby fallopian tube, where it may meet a sperm and be fertilised. Meanwhile, LH causes the follicle cells left on the ruptured ovary surface (now called the corpus luteum) to produce progesterone. This further thickens the endometrium and increases blood supply. If the egg is fertilised, it enters the uterus, embeds itself in the endometrium and produces its own hormone to ensure continued oestrogen and progesterone production and prevent miscarriage. If the egg isn't fertilised hormone production is shut off and the endometrium separates and is expelled as the menstrual bleed.

This complex interplay of hormones, can lead to problems. Ovulation may not occur, the fertilised egg may not implant properly, or the necessary miscarriage-preventing hormones may not be produced. Conditions such as endometriosis, where uterine lining cells migrate to other body sites but continue to act in response to reproductive hormones, also seem to be getting more common.