The immune system is responsible for defending and protecting the body against infection and disease, yet some people are unfamiliar with it. The lymphatic system is the body's main immune pathway. The spleen, thymus gland and bone marrow also help immunity.

The lymphatic system is a network of vessels similar to veins. Tiny lymphatic capillaries gather excess tissue fluid and wastes from the cells, and once inside the capillaries join together, forming progressively larger lymph vessels and ducts which eventually empty into the blood at the two subclavian veins just below the collar bones. On its journey from the tissue fluid to the blood, lymph is filtered several times through lymph nodes - these are commonly (but inaccurately) called glands, and if they are swollen you can feel superficial clusters of them in the groin, neck and underarms. Lymph nodes contain specialised white blood cells, called macrophages. These scavenge and destroy micro-organisms which have entered the porous lymph capillaries, preventing them from reaching the blood, from where they could spread disease. If large numbers of organisms enter a node, because of infection in the surrounding area, it may become swollen and tender, as it produces extra disease-fighting white cells, known as lymphocytes, to meet the threat.

There are 2 main types of lymphocytes, B- an T-cells. When a threat is over, most of the B- an T-cells produce to deal with it are destroyed, but a few remain as 'memory' cells, capable of recognising and responding instantly should the same invader attack in the future. Both kinds of lymphocytes can travel through the lymphatic and blood circulatory systems, squeezing out through capillary walls to attack invading bacteria and viruses in the tissues. When required, lymphocytes can also be produced by the spleen, there are thought to be between 10 and 15 billion lymphocytes in the circulatory system, not counting those in other organs.

Lymphocytes are also responsible for the immune system's ability to recognise 'self' from 'non-self', so that we don't attack our own cells. Sometimes this recognition fails, resulting in a group of conditions known as autoimmune diseases. These include multiple sclerosis, diabetes and rheumatoid arthritis. We inherit some immune abilities genetically, and as babies we receive short-term protection against certain diseases from antibodies in breast milk. The rest of our immunity is acquired, either by experiencing and successfully fighting a harmful organism, or by being immunised against it. 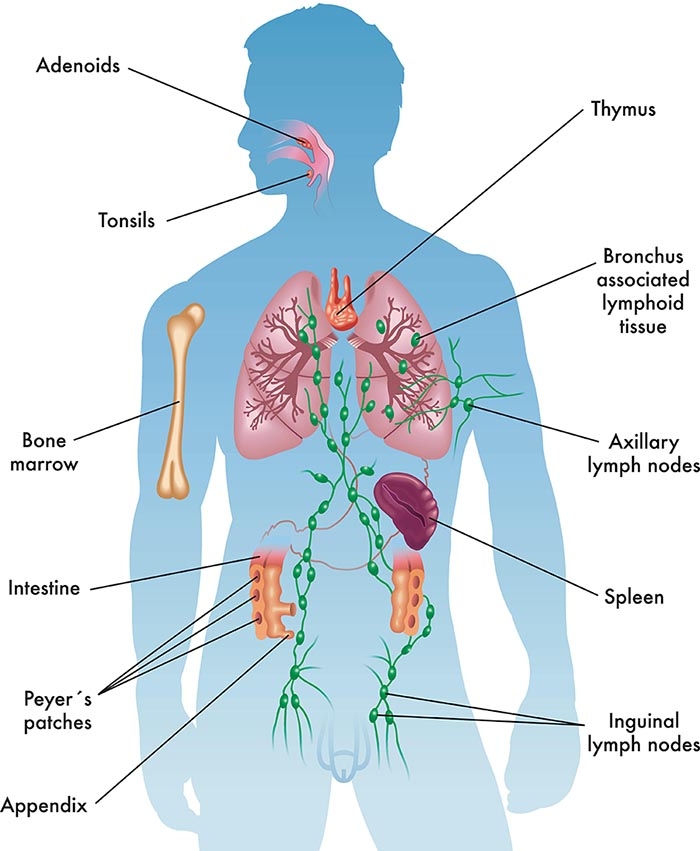 The thymus gland, which lies behind the breastbone, is large at birth and develops during childhood, but stops growing at puberty. It is responsible for 'priming' the T-lymphocytes in the first few months of life, training them to recognise self and non-self. It also secretes chemicals to co-ordinate immune activity. As it shrinks in later life, we become more susceptible to disease and tumour development.

The spleen is in the upper left-hand side of the abdomen, just under the ribcage. It holds about half a litre of blood at any given time, which it can squeeze into the bloodstream in an emergency. It acts like a giant lymph node, producing lots of lymphocytes to combat disease. It is quite possible to survive without a spleen, but immunity will be impaired.

Red bone marrow is found in the centre of bones and produces immature stem cells which develop into lymphocytes and monocytes, and then mature into macrophages. Children have red marrow in all their bones, but this gradually turns into non-productive, fatty, yellow bone marrow until, in adulthood, only a few flat bones, such as the breastbone and pelvis still contain active marrow.

The most common disease-causing organisms are bacteria and viruses. Both are microscopic, but bacteria are comparatively larger. They reproduce very rapidly, causing disease either by invading and destroying body cells, or by producing toxins which poison them. Bacteria can be treated by antibiotics, although some strains have become resistant. In contrast, viruses are tiny packages of genetic material which cannot reproduce by themselves. They penetrate a body cell, substituting their genetic material for the original, and hijacking its reproductive capacity to produce hundreds of new virus particles. Once inside the cell, a virus can't be detected by the immune system so it is more difficult for the body - or medicine - to overcome it.

The immune system can be seriously disrupted by long-term stress. It is common to see people who have pushed themselves to their limits become ill, usually after the event rather than during the stressful time itself. This makes sense if we consider the 'fight or flight' response. Our stress response is designed to keep us functioning through emergencies, and our body chemistry changes quite dramatically to ensure this. Even in less serious situations, our adrenal glands release higher levels of adrenaline, noradrenaline, and sex hormones, as well as hormones that modify our metabolism of sugars, proteins and minerals. Another stress hormone, cortisol, is anti-inflammatory and known to suppress immune responses. When the stress is withdrawn, the chemical levels drop. This leaves a time lag during which our emergency reserves have gone, but our everyday disease-fighting capacity isn't yet re-established - so it's no wonder we fall ill.

Research has also studied the link between the mind an the immune system and shown that white cells are affected by our emotions. Some of the most eminent researchers in the field of immunity are convinced that blocked emotions disrupt normal body functions, including our ability to fight disease, and are recognising the value of practices and therapies, such as meditation, massage and aromatherapy, to reach the unconscious mind through the body.