So far we have been concentrating on the seven major Chakras that run through the body. These are the ones most used for meditation and healing. But there are also other energy centres - the minor Chakras - that have important roles to play.

The Chakras deal with the energies in the body, such as the emotions and intellect, as well as being linked to the physical organs and the well being of the body. In a similar way, the minor Chakras in the upper body are connected with your perceptions, emotions and intellect, such as the minor Chakras in your ears and eyes, and also physical health, such as your Clavicle, Thymus and Breast Chakras. The Hand Chakras are a special case, as they are the points of focus for your energies when you direct them and can be used for spiritual healing purposes.

The Origin of the Chakras

The Indian texts, which are the origin of the Chakras, so not always agree on the number of Chakras. What has become seen as standard and is largely agreed upon through the texts is the system of six major Chakras in the spinal column from the Root to the Third Eye, with a seventh at the top, known as the Crown Chakra.

Other Chakras are also mentioned in some more esoteric texts, which have become known as the minor Chakras because they are subordinate to the major energy centres.

Modern research using Kirlian photography has also shown energy centres that are not located in the positions of the major Chakras, which provides further evidence for the minor Chakras.

The extensive work performed by spiritual healers with the minor Chakras has revealed what they are responsible for governing in the body. 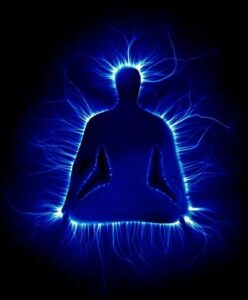 Here's an overciew of the minor Chakras that have so far been identified in the upper part of the body along with an explanation of some of their functions.

The breast Chakras are located on each breast and deal with responsibility and nutrition. These Chakras are most active in nursing mothers. Being so close to the Heart Chakra, they are associated with balance and the need to be responsible for your actions and the way you look after your body.

Located in the dip of the base of your neck where the clavicles meet, the Clavicle Chakra is associated with respiration through the windpipe and bronchial tubes. This Chakra is also linked with the lungs through this connection, and is stimulated to help treat respiratory conditions.

The ears are the centre of equilibrium in the body and one of the manifestations of a sluggish Ear Chakra is a lack of balance. The Ear Chakras keep the two sides of the body in balance, but they can also help you to maintain a balanced point of view, by making you listen to both sides of the argument.

Just behind each eye are the Eye Chakras. These are linked to the Third Eye, making a triangle of perception. As the Third Eye Chakra deals with your sixth sense and intuition, the Eye Chakras are involved with processing information that you extract from the environment.

A Hand Chakra is positioned in the palm of each hand. They link directly to the Heart Chakra and are also seen as the healing Chakras, because they are used by spiritualists to direct energy. Reiki healers channel healing through these Chakras and you can improve the quality of a massage by using them.

Like the Hand Chakras, the Thymus Chakra has strong ties with the Heart Chakra. Where the heart Chakra is the centre of balance, this minor Chakra deals with the immune system. This Chakra is stimulated in healing techniques such as Reiki to encourage the body's immune system into action.

Other Minor Chakras in the Upper Body

Here are some additional minor Chakras that are believed to reside in the upper part of the body.

At the base of the mouth is believed to be the Lalana or Kala Chakra, which acts as a control system that regulates the flow of spiritual energy throughout the body.

The Chandra (moon) Chakra between the Third Eye and Crown Chakras deals with spiritual states like mercy, patience, gentleness and feelings of emotional non-attachment.

Directly above the Third Eye Chakra is the Manas Chakra, which is linked to the five senses of the body and governs hallucinatory experiences brought on through vision questing.

The Forehead Chakra, about 2cm above the hairline, governs the thalamus and is linked to the Brow Chakra.