Orange is an equal mix of red and yellow, two of the primary colours, and as such it combines the energising qualities of red with the focusing qualities of yellow. Orange is associated with creativity, prosperity and developing self-esteem, being the colour attributed to Mercury, the god of information and communication.

Orange is a colour for dealing with ebb and flow, or their absence: artistic skills and creative inspiration are expressions of these slows; blocks and traumas indicate their absence. You can use orange crystals to stimulate the Sacral Chakra and remove any energy blockages in this area. The vibrant energy of orange also makes it a good colour for pregnant women, as it acts particularly on the womb and reproductive organs.

In the past, orange crystals have been linked to unusual legends and concepts that have attributed marvellous power to them.

Radiant beauty of fire opal has gathered some curious beliefs, such as its supposed ability to shine at night and stop blond hair from losing its colour. An ancient belief was that if a fire opal lost its colour it indicated the presence of a deadly poison.

In the Middle Ages, rubicelle was thought to protect from financial an physical disaster, and it was often used for protective amulets.

Topaz has also been linked to some strange beliefs, including the Greek thought which held that is exuded a milky fluid to cure rabies.

To the Ancient Egyptians topaz was sacred to the Sun god Ra. If you wish to harness the solar energy of this deity in your work, make an offering of orange topaz to Ra in your work space.

Work with the vibrant energy of orange crystals to encourage warmth, comfort and creative inspiration to enter your life.

If you suffer from digestive problems, amber is an excellent crystal to wear for its soothing orange glow.

If you are feeling miserable or depressed orange fluorite can help you to see things in a new light.

Fire opal is a good stone to help develop self-esteem and for creative inspiration. As a charm it can help break a spell of bad luck, and improve your good fortune. 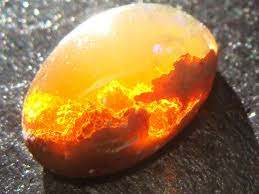 This valuable orange form of topaz acts as a good charm for pregnant women. Wear it to help overcome the suffering and discomfort of morning sickness.

Another name for orange spinel, rubicelle works well to release anger and blockages, helping you to overcome fear. Wear it if you are feeling at a low ebb and need energy. 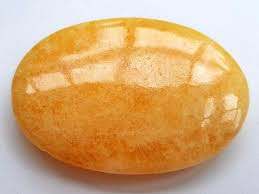 Orange calcite is an excellent crystal for helping to strengthen your emotions and for encouraging energy to flow more freely around the body, bringing more warmth into your life.

The warm orange glow of amber works well on the Sacral and Heart Chakras.

Amber can clear blockages in the Heart Chakra and can help if you suffer from breathing problems.

Amber has a calming effect on the nervous system and can protect against panic attacks. The healing capabilities of amber may be a reason why it has become popular in recent years.

Topaz is a good stone to meditate with to overcome stress, and release tensions and blocked anger. 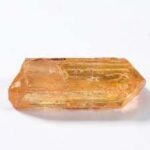 Orange crystals work on the Sacral Chakra and help give you the emotional strength and self-esteem you need to be creative and successful.

Orange crystals can help the body adjust to the physical, emotional and hormonal changes during pregnancy. They keep your energy flowing and help balance the emotional ups an downs.

After a trauma you may store an emotional blockage. You can use orange crystals to help overcome the pain of trauma and release energy so that you can move forwards.