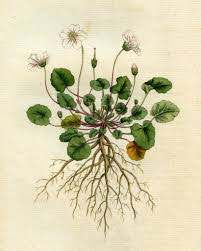 A native of South Africa, the geranium is mainly cultivated throughout the world for ornamental purposes. There are three main growing regions for oil production: the Reunion Islands (producers of the Bourbon-type geranium oil), Egypt and Russia. A relatively inexpensive geranium oil from China is increasingly available, although it has a less sweet aroma. Another newcomer to the trade of Madagascar. However, Bourbon-type geranium oil has always been regarded as the best.

Unlike the showy, perpetual-blooming varieties grown in tubs and window boxes, the pelargonium yielding essential oil produces relatively insignificant rose-pink or lavender flowers which appear in clusters during midsummer. In gardens, the plant is grown for its delightful scent, which is especially noticeable in hot sunshine or is a leaf is gently rubbed. Although the rose and lemon-scented varieties are the best known, there are numerous hybrids with a broad spectrum of copycat scents, ranging from orange, coconut and apple, through to peppermint, nutmeg and ginger. These experimental essential oils are not generally available to the main trade.

The name pelargonium derives from the Greek pelargos, meaning 'stork', whose head and bill the seed heads resembles; graveolens means 'aromatic' or 'strong smelling'. Pelargoniums came to Europe in the early 1600s as ornamental plants, and in 1819 the French chemist Recluz first distilled the leaves for the essential oil. Rose-scented perlagoniums are rarely used in herbal medicine, though two distantly related wild species of true geranium play an important role. These are the her Robert (Geranium robertianum) and the American cranesbill (Geranium maculatum), herbs which have been used since antiquity. Modern research shows these plants to be astringent, anti-inflammatory and vulnerary (aid the healing of wounds), which incidentally reflects their traditional uses in herbal medicine. Herbalists have always employed  extracts of true geranium for conditions such as diarrhoea and dysentery, and to heal cuts and wounds, ulcers and sores.

Go to a Good Source

Geranium oil is one of the most highly valued oils in the perfumery trade. The demands of the perfume industry sometimes exceed world supply of more exclusive oils and geranium is frequently used to 'stretch' more costly oils such as rose otto. However, geranium oil itself is particularly vulnerable to adulteration too. It's therefore essential to obtain the oil from a reputable supplier who can vouch for its authenticity.

Geranium oil is captured by steam distillation of the leaves, stalks and flowers. This produces a greenish liquid with a piercing, sweet, rosy aroma, often with an unexpected hint of mint. The odour effect is generally perceived as refreshing and uplifting. Some people describe the scent as enlivening, while others find it calming. For this reason, geranium oil is often described as 'balancing' - and has gained a reputation as gently uplifting the dispirited, and lowering stress levels in anyone nervy and anxious.

Beneficial in Many Ways 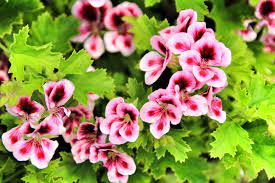 Widely used in commercial skin care products, geranium's antiseptic, astringent and cicatrisant properties make it an excellent ingredient in home-made skin care products for combination to oily skin. It is also useful on drier areas of skin prone to thread veins, and helpful as a supportive treatment for acne and certain forms of eczema. The oil can also be used to treat mild burns, bruises, ringworn, athlete's foot, shingles, haemorrhoids (to reduce pain and inflammation), facial neuralgia, cuts and wounds. It's also good for tiredness and convalescence.

Anecdotal evidence among aromatherapists and their clients suggests that the oil exerts a beneficial effect on the female menstrual cycle, helping to regulate periods and reduce symptoms of PMS. It's beneficial effects are associated with its ability to reduce fluid retention, a major symptom of PMS. Fluid retention is implicated in other PMS symptoms such as swollen breasts, headaches and mood swings. Many women have also found the oil helpful as a supportive remedy during menopause, primarily for its mood-elevating aroma.

Geranium can also be used in mouthwashes and gargles for sore throats an gum infections, although its strong, floral taste may not be popular with everyone.