Scientific developments in the last century have led to the production of flawless gems, such as are rarely found in nature. These gems have many commercial uses, for example flawless rubies are used in scientific lasers and diamonds in watches and drills. Some gems, including emeralds, are created using methods that reproduce the natural formation of gems at an accelerated rate. This produces quality gemstones, but are expensive because of the intensive manufacturing involved.

The major benefits of created crystals is that they're easier to 'program' with a specific desire, such as to heal a particular type of condition or act as an amulet against a particular problem.

Many of the artificially constructed stones are cheaper than their natural counterparts, which means that they have become more available for use in healing and energy work.

The manufacture of created crystals began in the late 19th century. In the early 1880s an unknown Swiss priest produce reconstituted rubies by heating them together at 1800°C (3,272°F) and then adding chromic oxide. The rubies lost their rich, red colour when heated, but the chromic oxide restored their original colour.

When the reconstituted nature of these 'Geneva Rubies' became known, the demand for them initially fell and production stopped. From the 1920s, however, customer demand saw an increase in the production of synthetic stones such as diamonds. The popularity in more recent times of cubic zirconia shows prejudice towards created crystals is becoming a thing of the past.

There are many different types of created crystals, from dyed crystals to reconstituted gems. They may be used in the same way as natural stones for healing work or for energy work.

Aqua aura is an attractive, transparent, blue crystal, which is now widely available for sale. It's formed by creating quartz an then bonding gold to the surface of the crystal. It can be used to help people deal with Seasonal Affective Disorder (SAD).

Aqua aura also works well to help alleviate stress, particularly that caused by day-to-day living, such as commuting. It seems highly appropriate that a modern-day manufactured crystal should work to heal the conditions that humans have created, as we have changed our environment and made it more stressful to body and soul. 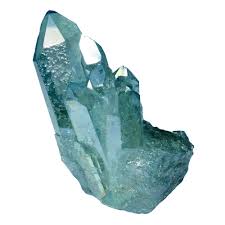 Aqua aura can be used in the same manner as quartz for healing work such as unblocking the Chakras.

Low-quality amethyst has an uneven purplish colour and is often heated as it changes to a more even golden-brown, thus becoming citrine quartz. Small pieces of amber are frequently recombined into larger pieces using a hydraulic press at high pressure. Sunstone is reconstituted into an artificial gemstone called goldstone.

Crystals that have been subjected to heat treatments need to be 'programmed' to work in the same way as the original varieties of the stone, by imprinting the type of energy or healing you wish to use the stone for.

A common trick used when selling crystals is to dye the crystal, to improve the colour or to make the colour more even. A crystal necklace where the colour of each stone is perfectly uniform is likely to have been dyed.

It's usually the more porous stones that are dyed, such as agate, jade, rose quartz and turquoise. Agate has been dyed since the time of Ancient Rome and is still coloured today, especially to pink and blue shades. 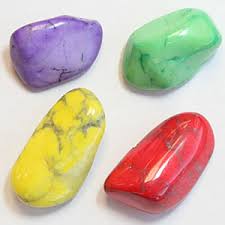 Dying a stone does not affect its essential qualities, it just makes it more pleasing to look at. Dyed crystals may be used in exactly the same manner as non-dyed crystals, as their powers aren't affected by the process.

The crystal can also be used to harness and focus the attributes of its chosen colour, such as a pink or green gem for creating your love energy work.

In 1600BC, glass was introduced by the Ancient Egyptians as a substitute for real crystals. It was cheap to manufacture, easy to colour and versatile to work with. Glass is still used today to imitate crystals.

Lead 'crystal' glass is produced by adding lead oxide during the production of glass. This makes the glass look more like quartz, which is often sold as, particularly under the misleading name of 'crystal'.

Glass crystal can be used for several purposes. It works very well as balls for scrying and pendants for dowsing. Coloured glass can also be used to harness the qualities of its dyed colour.