The Celts were polytheistic and animistic and they had a pantheon of goddesses and gods. The deities were called upon for their assistance in areas specifically associated with them and no one god or goddess was seen as more supreme. Water sources such as wells and rivers were venerated, as water was considered to be particularly magical and was used metaphorically to explain the sacred cycles of existence.

The structure of existence

The Celts saw the universe as being composed of three worlds.

The first was Annwn, the Underworld, a place of new beginnings, from where life sprang and to which it returned. Abred, the middle world, was the earthly plane, where people lived their lives. The third world was Gwynvyd, the upper world. A realm of immortal beings where souls went when they had broken the cycle of reincarnation in Abred. The upper part of Gwynvyd was Ceugant where the gods and goddesses dwelt. 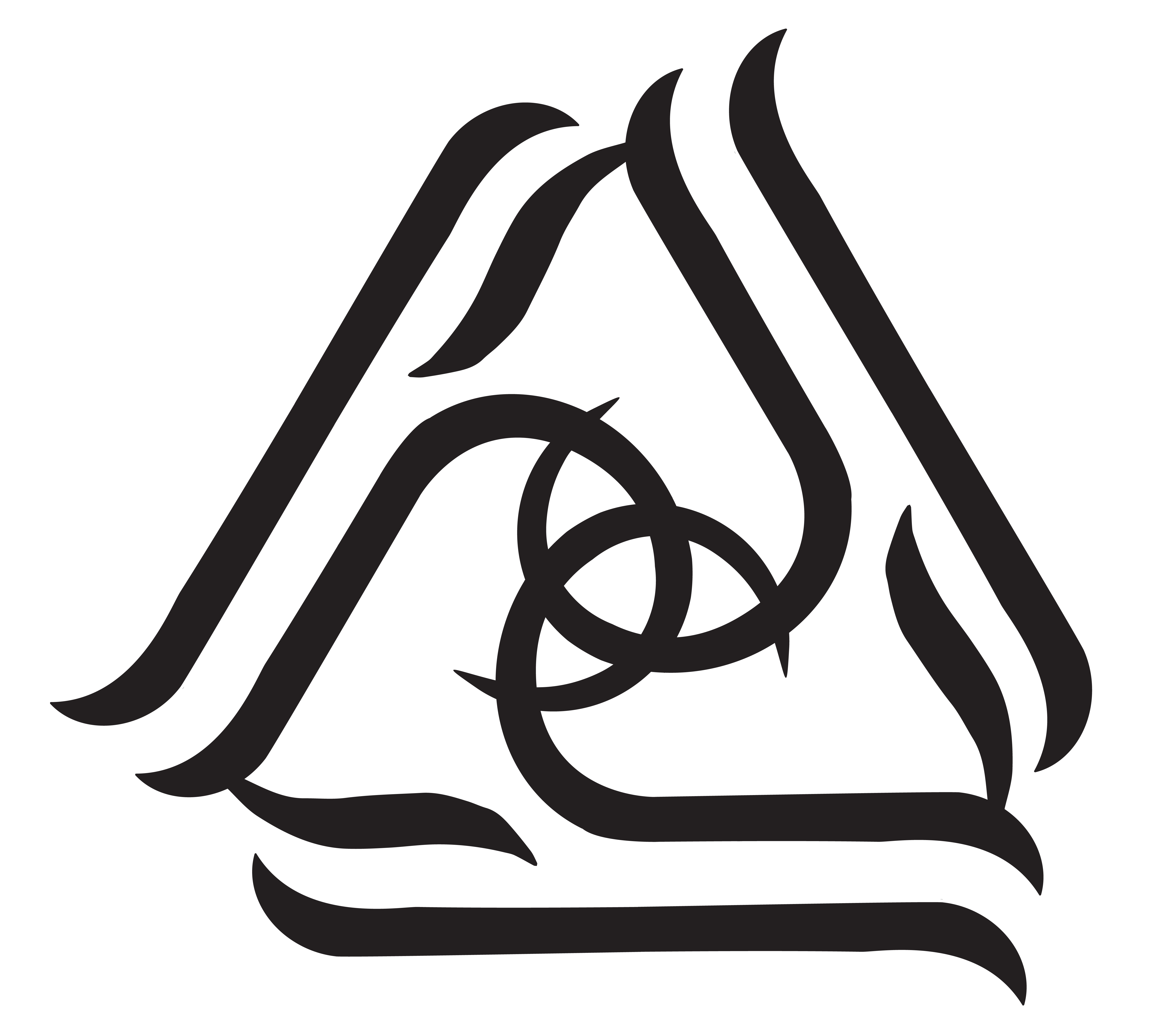 The people usually thought of as the Celts occupied the British Isles, Ireland, parts of France (especially Brittany and Normandy) and areas of Switzerland and Germany. The Celts flourished from 700BC, but had largely vanished by the 5th century AD. They were a warrior people and were involved in several campaigns that would have important repercussions for Europe such as the sacking of Rome and alliances with Alexander the Great.

In terms of social organisation it is believed that the Celts were divided into three groups. Warrior class, intellectual class, and everyone else. In the early years of Celtic civilisation, women were treated equally and could rise to the position of tribal leader.

The Celtic views of the afterlife affected the belief systems of subsequent cultures and led to the creation of one of Britain's greatest legends, the myth of the Isle of Avalon.

According to Celtic belief systems the soul of the deceased would go to Annwn after death, unless it was particularly advanced and had no more lessons it needed to learn, in which case it would go straight to Gwynvyd. Annwn was full of the spirits of the dead, who lived together without harmony or conflict.

In Annwn there was a magical cauldron with nine maidens to guard it. The souls of the dead would rest in Annwn until they were ready to be reborn into Abred. Annwn also help many precious items and it was here that King Arthur came to retrieve the great treasures of Britain. If a living person was brave enough, they could venture to the world of Annwn, though there was no guarantee of returning if they were caught there. In Gwynvyd resided gods of light, the Sun and Moon and the elements. 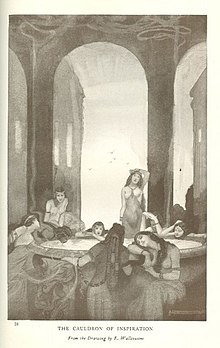 The isles of the blest

Another vision of Annwn can be found in Celtic/Irish beliefs. 'The Isles of the Blest' was an island in the far western sea (the Atlantic), which could only be reached through great hardship and struggle. It was a wonderful paradise, but could only be found if Mannanan Mac Lir, the god of the sea, allowed. 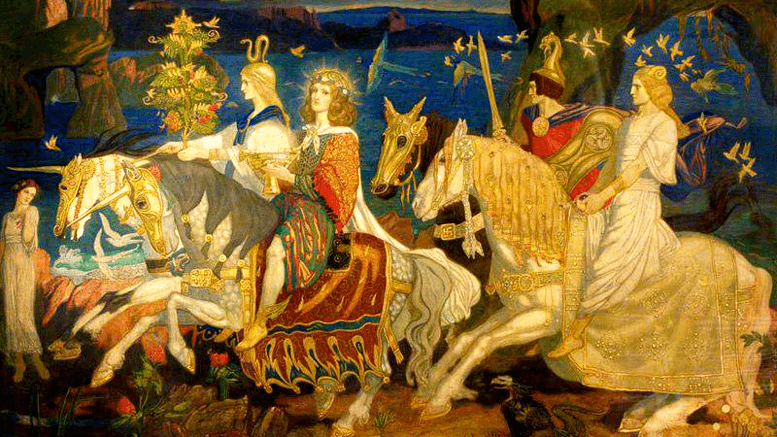 The Irish gods, the Tuatha de Danan, were said to reside in their own paradisaical realm, Tir Na Nog, which could also be seen as akin to heaven, there they might take a hero if he won their favour through exceptional deeds.

In later times this Celtic notion was used to form one of Britains most enduring myths - The Isle of Avalon.

The location of the magical isle is shrouded in mystery, but according to English legend the mortally-wounded King Arthur was taken there to recuperate after his final battle. In Alfred Lord Tennyson's poem Morte d'Arthur, Avalon is described as a place

"Where falls not hail, or rain, or any snow, Nor ever wind blows loudly, but it lies Deep-meadow'd happy, fair with orchard-lawns, and bowery hollows crown'd with summer sea". 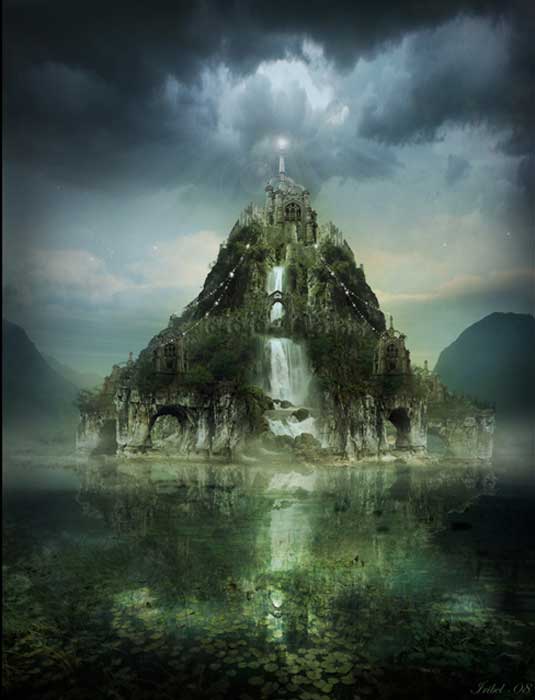 The Welsh god Arawn was initially seen as the ruler of Annwn and was supplanted as the god Gwyn Ap Nudd (Bright or Holy Son of Nudd, the War God). According to legend both of these gods were masters of a pack of Otherworldy hounds that they would use to look for souls to transport to the realm of Annwn.

The dogs were described as white with red ears and as a result these two colours were associated with Annwn by the Celts. The Wild Hunt, as the hunt for souls was known, rode at Samhain, the Celtic New Year, when the veil between Abred and Annwn was said to be at its thinnest. Both Arawn and Gwyn Ap Nudd were also said to have herds of pigs, another animal particularly associated with the Annwn realm, which were used to eat corpses.