The pine family consists of more than 100 species, though the scots pine (Pinus sylvestris) is the most widespread variety, and the safest to use therapeutically. This tall, evergreen conifer rises over 35 metres, the crown at first conical, later becoming distinctly flattened. It has deeply fissured, reddish-brown bark, pairs of bluish-green needles and pointed brown cones. 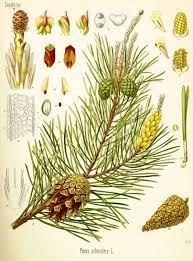 The tree is native to the mountainous regions of northern and western Europe (including Britain) and parts of Russia.

The best quality essential oil is captured by steam distillation of the needles. A pine essential oil is also extracted from the cones, twigs and wood chippings, but this has a relatively harsh aroma and is not recommended for aromatherapy. The oil obtained from the resin is known as turpentine and used mainly as a paint thinner or solvent. Although turpentine does have medicinal properties, it is rarely used in aromatherapy as it can irritate the skin and mucous membranes. Essential oils are obtained from several other species of pine, including dwarf pine (Pinus mugo var. pumilio) and longleaf pine (Pinus palustris), but these should be avoided by the home user as they can also irritate the skin. Always check the label for the botanical name. If it is not specified, so not buy.

The oil extracted from the needles of Scots pine is colourless to pale yellow. It has a strong, dry, balsamic aroma with a camphoraceous undertone - the effect is refreshing, cooling and enlivening. As well as having many medicinal uses, this powerful antiseptic oil (or its many synthetic counterparts) is used in disinfectants, air-fresheners, detergents, and other household cleaning products.

Pine in the Past 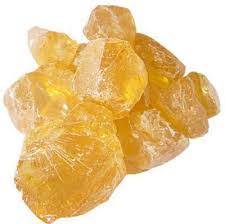 The resin of the pine tree, collected from cuts in its trunk which exude the gummy substance, has been used for centuries as an incense gum. When burnt, it is believed to clear a place of negative influences. The pine kernels ('nuts' found in the cones) were eaten by ancient Egyptians, who added them to bread.

Hippocrates prescribed an extract of the resin for pneumonia, and Arab physicians used it to treat 'ulcers of the lungs'. probably tuberculosis. Indeed, TB clinics were always sited near pine forests, as the aroma is known to be beneficial to the respiratory system, as well as uplifting to the spirits.

Modern herbalists prescribe the young leaf shoots and/or pine cone buds to be taken as a herb tea for bronchial complaints, cystitis, rheumatism and gout, and as a gargle for sore throats and laryngitis. Stronger infusions prepared from pine needles are added to the bath for arthritic and rheumatic pain, poor circulation, slow-healing wounds, skin diseases and nervous exhaustion. The essential oil is incorporated into liniments to rub into painful joints and aching muscles. In certain parts of the Swiss Alps, mattresses filled with pine needles are believed to help most rheumatic conditions.