There are about 20 species of cypress, though the variety commonly used for extracting the essential oil is Italian cypress (cypresses sempervirens), native to the Mediterranean basin. The cypress is a tree of great beauty, etching its tapering silhouette against the sky, sometimes reaching as high as 45m. 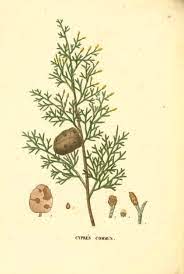 Indeed, the branches of this tall, evergreen conifer grow almost upright, giving the tree a columnar appearance. The female flowers are bright green and develop into little egg-shaped cones with hexagonal scales. Cypress trees are exceptionally long-lived. Some contemporary specimens are believed to be at least 2,000 years old.

The Italian cypress is now cultivated mainly in France, Spain and Morocco for essential oil production. In the south of France the trees are planted very close together to provide a screen against the annual mistral storms. They are also green for ornamental purposes in many gardens in Greece, Italy and the south of France.

The ancient Egyptians burned the wood, cones and needles as holy incense, and used the wood to make sarcophagi because it is so durable. The Greek philosopher Plato claimed cypress wood was harder than the bronze of a statue, and for him its evergreen leaves were the symbol of immortality. 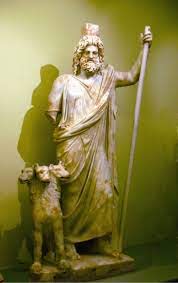 The tree was dedicated to Hades (Pluto to the Romans), god of the underworld. For this reason, and the fact that symbolically they point heavenwards, cypress trees were planted in graveyards throughout the Mediterranean as a symbol of grief and a source of solace.

It was the custom in ancient Greece to send people suffering from lung diseases to breathe the air of the cypress groves. Galen recommended infusions of the female flowers for diarrhoea. And Hippocrates is said to have administered extracts of the wood to treat diseases of the uterus and severe cases of bleeding haemorrhoids. Cypress has an equally ancient reputation for alleviating menstrual disorders, particularly heavy periods in the run-up to the menopause. Interestingly, every herbalist, ancient and modern, extols the virtues of cypress as a remedy for excessive bleeding, both internal and external. These days, herbal medicine practitioners use only the cones, picked in springtime while still green and fleshy.

Cypress oil is extracted by steam distillation of the needles and twigs (sometimes also the cones) obtained by pruning the trees in autumn. The oil is a clear to slightly yellow liquid with a balsamic, pine-like aroma. The effect of its odour is head-clearing, soothing and cooling. The smell is often described as having an expansive yet grounding sensation which makes cypress oil ideal for using in a burner as an aid to meditation.

Cypress oil can restore calm to a frantic nervous system. It can act as a stabilising influence in the midst of a chaotic lifestyle and remind us to pay attention to our needs. For this purpose, it is best added to the bath or made into a massage oil, perhaps blended with lemon and lavender to improve its aroma and support its cooling and restorative effect.

The medicinal effects of cypress are primarily astringent and similar to those of witch hazel. It is valuable for treating wounds, haemorrhoids and varicose veins, and for stemming excessive perspiration (particularly sweaty feet), menopausal night sweats and associated hot flushes.

Its effect on the female reproductive system may be due to the presence of phyto-hormones (plant hormones) which mimic those found in a woman's body. This is why aromatherapists and their clients often note that cypress, especially in combination with clary sage, is helpful for the more distressing symptoms of menopause.

French aromatherapy pioneer Dr Jean Valnet recommends cypress oil for coughs and bronchitis: a few drops of oil sprinkled on the pillow at night have been shown to ease congestion, reduce coughing bouts an ensure a better night's sleep. In France cough pastilles were once made from crushed cypress cones. 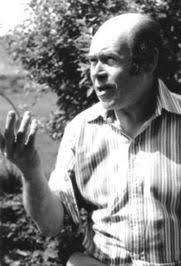 In beauty care, cypress oil is a good choice for oily skin and hair. It can be added to home-made skin tonics and aftershaves, or to unperfumed moisturising lotions and shampoos. For complexions prone to thread veins, cypress oil works well with frankincense and neroli oils. And its diuretic action makes it a valuable ingredient in massage oil blends for cellulite.